Not a member? You can qualify for membership if you: 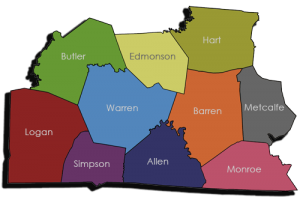 In 1963, a group of WKU faculty and staff decided to help other people at Western Kentucky University by loaning them money. The group determined a credit union was the best way to serve others. Western Kentucky State Credit Union was Incorporated and approved by the Department of Banking in January 1963.

On February 28, 1992, approval was given by the Department of Financial Institutions to change the name from Western Kentucky State Credit Union to Service One Credit Union. Along with WKU employees, students and alumni, and Select Employee Groups, the change helped the credit union serve the Barren River Development District (BRADD) as a field of membership.

January 2012, individual membership eligibility was approved based upon the common bond of a person’s daily activities and interactions within a community shall be open to individuals who live, work, or worship within counties defined as the Barren River Area Development District as established by KRS147A.05.

A few of the most innovative features of the Campbell Lane Branch include a living “Green Roof System” for added roof insulation, a Bioretention Basin which controls stormwater runoff, reclaimed wood timbers from a historic mill which eliminated the need for a sprinkler system, and the first commercially-installed Nanogel-insulated windows.

Service One was the first financial institution to utilize cash-recycling machines in 2009 which streamlined service and eliminated the need for cash drawers for its member service personnel.

We are always evaluating ways to improve our credit union for our members.

What it means to be “Not-for-Profit”

Service One is committed to enabling our members to reach their financial goals.

As a credit union, we do not have shareholders, issue stock, or pay earnings dividends to outside stockholders. Instead, every member owns an equal stake in the institution, regardless of how much money they have on deposit. One of the ways a member can use this ownership is to vote for our Board of Directors. Our local Board of Directors, elected by the membership at the Annual Shareholders’ Meeting, serve as unpaid volunteers and determine the credit union’s direction.

Any profits Service One earns are returned to the membership in the form of better rates on loans and savings, lower fees, dividends, and improved services. Also, we are less likely to charge service fees than for-profit banks, and when we do charge, fees tend to be lower.